My thoughts / inspiration for this second PAP came from the faces and design work in chapter 12 of module 2, and my penchant for lace and cutwork.  I originally wanted to do a hanging of some kind largely using metal shim, to create a posterized mosaic portrait of metal fragments set in lace. 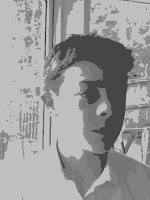 I liked my initial attempts at creating a mosaic 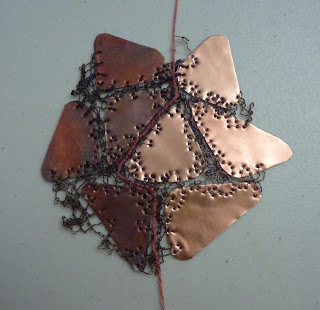 but found difficulty in both producing a large enough range of different metal tones providing enough detail with the size of the metal pieces.  As Sian pointed out either my pieces had to be very small (which might mean the appearance of metal might be lost among the lace) or the hanging would be need to be very large.

I rethought things and decided to stay with the mosaic idea but incorporate it as lace into a wearable garment with recurring faces appearing in sections of the garment. 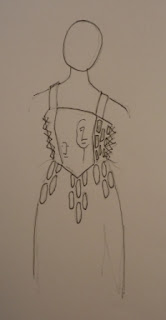 The very bad sketch on the left shows a basic corset construction for the bodice which will have lacings down each side, (one real for garment to get on and off).  Details of the straps are undecided at present.
The side panels will have metal shim shapes attached in a mosaic effect, while the centre front and back panels will have the 'faces' feature in metal shim and embroidery.

The volume and length of the skirt I am undecided about but I want it to exist in layers of translucent fabric so that I can have faces embroidered and cut out in different layers, all seen overlapping together.

At the top of the skirt will be a lacework of metal shim fragments in 3 or 4 sections but each will be unattached to the fabric layer beneath it.

I began by preparing my copper shim (acquired from Art Van Go in the UK thanks to my 2nd prize in the sketchbook competition).  I didn't want it looking obviously like copper so I patinated it to a dark auburn /almost black surface using liver of sulphur gel. 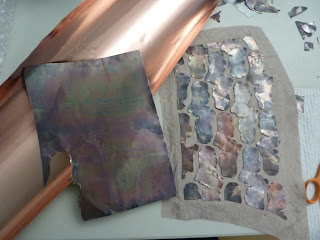 The mosaic shape I chose was a stylised facial profile, at least with a nose and mouth on both edges of the shape (not too obvious in this photo I have to admit).
I decided to use natural dyes to create a subtle colour palette of fabrics that I might need, so used dried eucalypt leaves, boiling about 300g in a mesh bag in about 6l water for an hour.  I added a couple of teaspoons of ferrous sulphate as mordant, as I wanted a dark metallic tinge to the colour rather than too bright.  I removed the bag of leaves and added the fabrics, cotton first before the silk ones, simmering for a further 30mins. 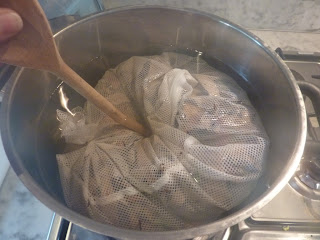 The resulting fabrics and threads - ochre to grey: 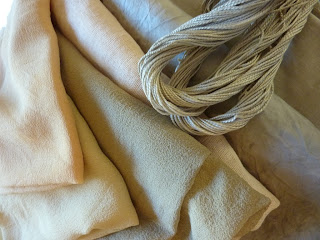 To cut a long story short, I've made most of the bodice to date: 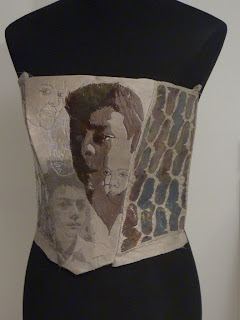 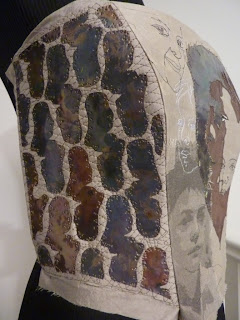 The free machining to attach the metal shim mosaic is done in metallic thread in a crisscross fashion like lacing.  The background fabric is dyed silk dupion. The corset has a fairly stiff thickish batting (used in bag making) backed to the fabric, to give it structure. 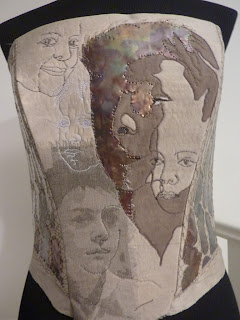 The front panel shows a posterized image printed on dyed cotton scrim (bottom left) with some surface embroidery, more embroidered faces in metallic and white thread and the main image in metal shim and cut organza sheer.  The faces and images are all from my own photos.
The back panel is similar to this with different images.

Wow! Helen, this work is just wonderful. I love how your blog shows your thought patterns. This is so imaginative. It will look beautiful I'm sure.

Oh Helen! This is looking really interesting. The patination gives you so much variety. Lovely.

i love your mosaic shapes and the colours you have used work beautifully. looking forward to the next installment!

Thanks for the positive comments guys. much appreciated. My husband dodges the "does this work?" look I frequently give him.

Wonderful and bold Helen. No doubt it's going to be a very successful piece

Fibrenell
Hi, I'm Helen MacRitchie, a Scot now living in a suburb of Sydney, Australia. I have a passion for all things textile and would happily spend all day 'playing' with fibre! 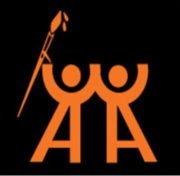